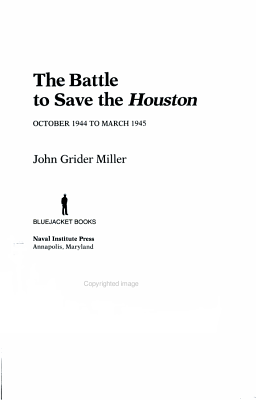 The Battle to Save the Houston Book Details:

A World War II adventure story of epic proportions, this book tells the heroic tale of a dedicated band of men who refused to let their crippled ship sink to the bottom of the Pacific in late 1944. Based on over seventy eyewitness accounts and hundreds of official documents and personal papers, it records in rich detail the USS Houston's 14,000-mile perilous journey home to the Brooklyn Navy Yard. Part of Bull Halsey's famous Pacific Task Force 38, the Houston's had been supporting air strikes as a prelude to the Battle of Leyte Gulf, when she took an aerial torpedo hit that caused serious flooding. Nearly two-thirds of the crew abandoned ship before the damage-control officer convinced the captain she might be saved. Another torpedo hit two days later complicated the crew's desperate fight. Surrounded by death, floodwaters, and fire, stalked by enemy subs, threatened by air attack, and running from a typhoon, the men of the Houston's remained towers of strength while knowing their ship was never more than minutes away from breaking apart. John Miller's action-packed account gives insights into the nature of heroism and leadership that remain valuable today. Exceptional photographic documentation accompanies the text.

The Battle to Save the Houston

The Battle to Save the Houston

Authors: John Grider Miller
Categories: History
An account of the Japanese's bombing of the U.S. light cruiser Houston describes how the survivors of the attack became sitting ducks for enemy air strikes, sub

This Fight Is Our Fight

Fighting to Save Our Urban Schools-- and Winning!

Authors: Donald R. McAdams
Categories: Education
Don McAdams, one of a small group of activists elected to the Houston Independent School District Board of Education in 1989, provides a fast moving first-perso

Authors: Mark Lardas
Categories: History
The cruiser Houston was the first warship named for the Bayou City, and the ship proved a favorite of the city for which it was named. It was also a favorite of